I’ve been trying to plan our summer vacation(s), and I’m having a bit of trouble deciding where to go.

My original plan was to do a quick Jersey shore trip (probably a long weekend) in early summer, and then a longer trip for our 2nd wedding anniversary in late August. I was thinking Maine for our August trip – it’s beautiful, we’d have city (Portland) and beach (Kennebunkport or Boothbay) options, plus lobster rolls! But when I started planning, I found that it was next to impossible to find a rental or hotel in coastal Maine in late August that was both available and didn’t cost $500/night. I thought about switching the trips – Jersey in August and Maine in June – but Maine isn’t very warm in June.

So, I’ve pretty much scrapped the Maine idea. I’m trying to keep things on the budget-friendly side, so I’d like to go somewhere within driving distance (plus we love a road trip, and haven’t taken a real one in a while). I’ve considered a bunch of options (Hilton Head, the Outer Banks, etc.), but I keep coming back to New England – while southern beach towns are relatively similar to our beaches around here, New England has such a unique feel. Right now, I’m thinking Cape Cod in late June – it’ll be right before the main season so we’ll hopefully dodge the crowds a bit, but by the end of June it should be warm enough to swim. I’m thinking we’ll do Monday – Thursday in Provincetown, check out on Friday and take a quick detour to overnight in Boston, then head home Saturday. I’m waiting for Jeff’s approval, but I’m already dreaming of lobster rolls, clam chowdah, lazy afternoons on the beach, and evenings by the fire pit. (And maybe a drag show or two – when in Rome!)

Provincetown sits at the very tip of the cape.

Retro Harbor Hotel on the bay

Lobster rolls on the deck of The Canteen 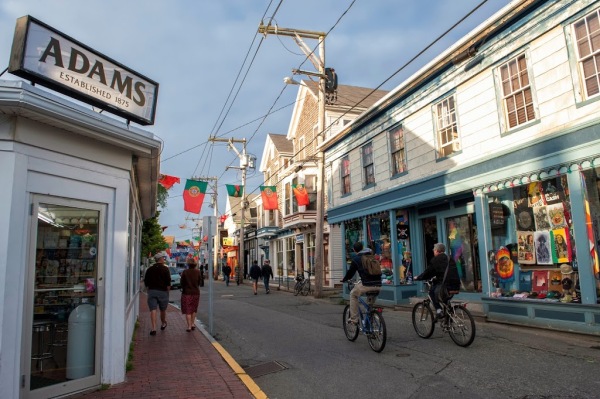